The Haci Mustafa fountain as surveyed in Peytier’s map (1829).

The Haci Mustafa fountain stands at the edge of the northern Acrocorinth slopes, below the Sanctuary of Demeter and Kore, at an elevation ca. 120 meters above sea level, close at the old path leading up to the hill. The general form of the masonry structure shows the characteristic features, which are applied to a common type of Turkish çeşme, an architectural type often met in the area of Peloponnese.
Its collective tank, built against the hill, is covered by a lowered barrel vault, which is though hardly evident by the side facades. A small opening is found at the western flank.

The four-sided fountain presents a 4,75 meter long impressive façade of limestone, built with large porous stones of equal dimensions, and spolia (marble architectural elements in secondary use) have been incorporated in the structure. A low pointed arched contour, which consists of two successive rows of voussoirs, crowns the façade (part of it has been damaged at the top), reaching a height of 3,85 meter. The protruding wings of limestone on which the arch rests, repose on two marble consoles (window pillars) set at both sides, from the early Christian period, which are decorated with a Christogram inscribed in circles in their inner side. The base of the fountain is formed by reused marble mullions, where most possibly people collecting water could sit.

Water is channeled into a large basin (kurna) of marble spoils placed under the fountain’s base. A central spout was set over the basin, while two holes have been opened sideways, one functioning till today. A long block of well-cut fish scale pattern stone was placed at the entire width of the recess above the basin that is surmounted by the donor’s inscription. The 0,95×0,60 m slab, set in the tympanum of the 0,84 meter deep recess, gives the name of the fountain’s benefactor and the date of its construction. According to the transcription of the Arabic text, the fountain owns its presence to Joseph the Tailor, who had ordered its construction in 1515 A.D. The Turkish traveler Evliya Çelebi visited the city of Ancient Corinth in A.D. in 1669 and had recorded the fountain with its inscription.

” Joseph the tailor ordered the construction of this [fountain] for flowing water entirely at his own expense, for the love of God, let Him be exalted, and desiring to please the Merciful Lord, in the nine hundred and twenty-first year [of the Hegira (1515 A.D.)].”
The fountain has taken the name of Haci Mustafa neighborhood, to which is belongs and is therefore known today under the same homonymous name.

Robinson Betsey A., “Histories of Peirene: A Corinthian Fountain in Three Millennia”, in Ancient Art and Architecture in Context 2. 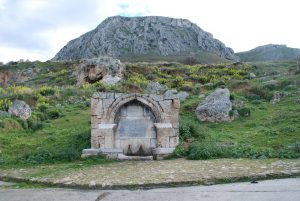 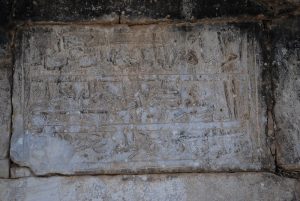 The Ottoman inscription on the fountain. Photo: E. Kanetaki 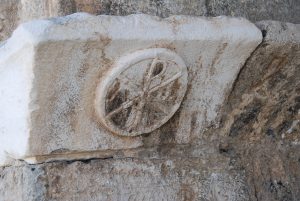 Byzantine capital incorporated in the building material of the fountain.

​
The topographical Survey of Corinth, as prepared by WILLIAM B. DINSMOOR (1964), showed the location of Water sources, that were marked in his topographical chart of Corinth (P1. XVIII).