The Murat Ağa fountain is situated at the upper terrace east of Lechaion Road, circa 375 m. northeast of the Ancient Corinth village square. It is set at an eevation 70 Metres above sea level, easily found at a lower plateau alongside the main provincial road.

Its masonry structure differs from the other monumental ottoman fountains of the area. The simple façade is made out of limestone measuring 2,90 m wide and 1,30 m thick. It is crowned by a triangular pediment at a small recess 5 cm deep, reaching a 1,70 m height. Two small marble basins, partly damaged, were used for the provision with water, while two shallow niches were set at the main forehead of the facade. As two big stone launders were placed under the basins, this indication may imply that the fountain was quite probably used for the washing of clothes.

The fountain’s catchment tunnel is no longer visible, as it seems to have been abandoned in the past centuries. It is connected with two adjoining water reservoirs, measuring 4,60×6,60 and 6,60×6,60 m. 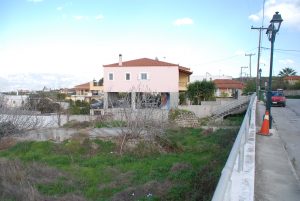 ​According to the existing bibliography, archaeologist A. M. Skias alleged that the fountain was most likely to derive its supply from the ancient fountain of Peirene (P1. XVIII, 8) [Πρακτικά της εν Αθήναις Αρχαιολογικής Εταιρείας, 1906, Α. Σκιάς, or 1892, p. 115), an identification which was though not testified due to the limited trial excavations made by Skias for the Greek Archaeological Society in 1892 since he failed to find evidence of the Agora.